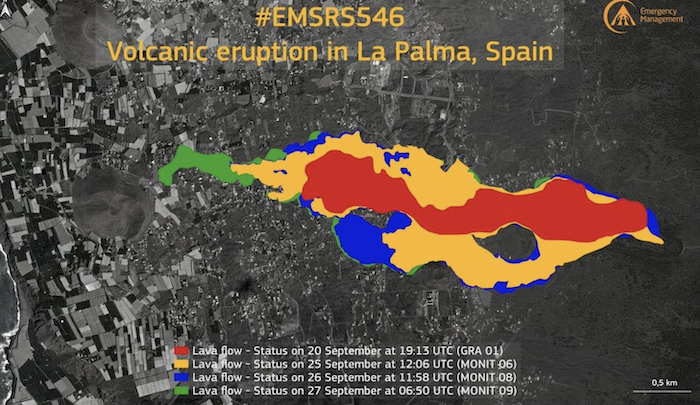 processes and their risk to life and landscape. Remote sensing can provide a number of different observation and measurement opportunities to examine the dynamics and impacts of volcanic activity by using ultraviolet (UV), visible (VIS), infrared (IR), and microwave sensors. combine with GIS significant analytical power can be harnessed to better understand the situation.

Cumbre Vieja is volcano located on the island of La Palma, which is part of the Spanish Canary Islands and lies west of Tenerife. Natura 2000 protects 51% of the total surface of the island. The volcano is active for the first time in last 50 years and its eruptive activity began on Sunday, September 19. Since then lava has destroyed and engulfed over 600 buildings and caused extensive damage to agricultural crops and banana plantations, which are inside of plastic greenhouses that burn on contact with lava and release toxic substances into the atmosphere.

A crack opened in the Cumbre Vieja volcano on 19 September, ash and lava were thrown into the air. Lava then flowed down the mountain and through villages engulfing everything in its path. By 28 September, a 6-km lava flow had been created, which has now reached the ocean on the island’s west coast. Clouds of white steam were reported where the red-hot lava hit the water in the Playa Nueva area.

The eruption has so far driven almost 7,000 people from their homes. Flights from the local airport were interrupted due to the ashes scattered in the air. The lava flow arrived in the coast of Atlantic Ocean on Tuesday night. Experts have previously warned that when hot lava with a temperature of about 1000 degrees Celsius contacts with salty seawater it will lead to creation of toxic emissions. Using Copernicus and Landsat satellite services, higher education students can track the changes on the landscape produced by lava flows.

The following links provide up-to-date data and information about the lava eruption of Cumbre Vieja.